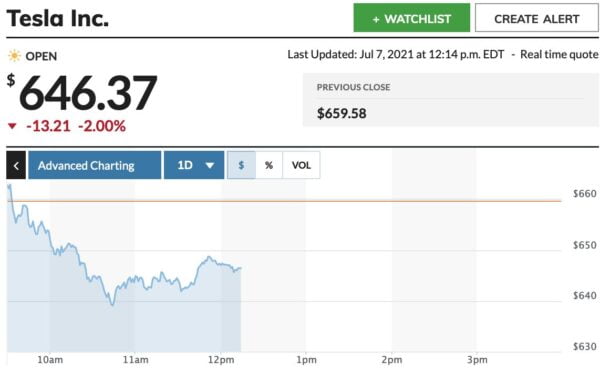 After delivering a record-breaking 201,250 vehicles in this year’s second quarter, Tesla (TSLA) was acknowledged as underweight by J.P. Morgan, which bumped up the company’s production forecast.

The deliveries, also outperforming the firm’s 196,690 estimate, prompted analyst Ryan Brinkman to raise his earnings-per-share estimate from $0.86 to $0.91.

In a note explaining the impetus for the forecast increase, Brinkman wrote, “We are raising our [earnings] estimates slightly to account for Q2 global deliveries of 201,250.” Brinkman continued, saying the deliveries were “approximately in line with consensus of 200,879, but a bit more than the 196,690 we were looking for.”

At the time of writing, Tesla’s (TSLA) shares were trading at $646.37, down 2 percent from yesterday’s close.