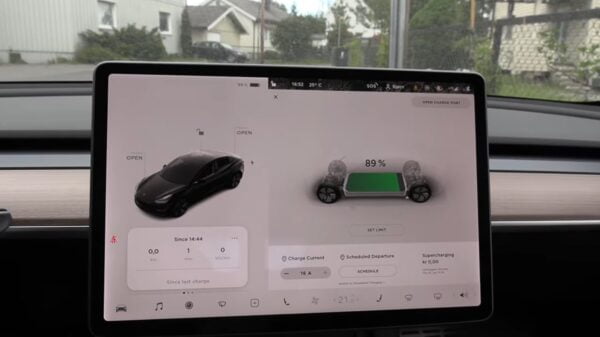 Tesla’s Model 3 has become the world’s most popular electric vehicle (EV) over the past few years, although users with units made at the company’s Gigafactory Shanghai in China are now detailing battery improvements from cars made at this factory, which started using lithium-iron-phosphate (LFP) cells last fall.

In a video shared on Monday by Bjørn Nyland, the EV enthusiast breaks down a Made-in-China Tesla Model 3’s subtle battery drain over the course of 14 days, showing that the vehicle is losing battery despite not being used. The vehicle is shown to have lost roughly 0.36 percent of the battery each day it wasn’t in use, equating to about 1 percent of lost battery every 3 days.

According to calculations made in the video, the Tesla Model 3 unit was draining 178.5 Wh per day, amounting to about 5 percent total over the course of two weeks, or 2.5 kWh drained total in that time. Bjørn also notes that the car could be draining small amounts when briefly woken up to update, also seeing a loss of 0.2-0.3 percent while he sits in the car for the duration of the video.

Rumors also hold that Tesla’s Model 3 SR+ in Canada could feature newer battery technology, though the report hasn’t yet been confirmed.

While the battery drain can be a bit annoying, Bjørk emphasizes how little battery is actually lost over time, saying that owners can simply “take that into account when traveling,” to mitigate being stranded or losing too much battery.

Although Tesla CEO Elon Musk has previously said he hopes to shift away from end-of-quarter sales pushes, the automaker is expected to have another huge batch of deliveries heading to customers to end the third quarter. Musk apparently sent an email to employees requesting help for a “very high volume” of third-quarter deliveries, and analysts […]
Peter McGuthrie
7 hours ago