Tesla Model 3 SR+ in Canada May Include Newer Battery Tech 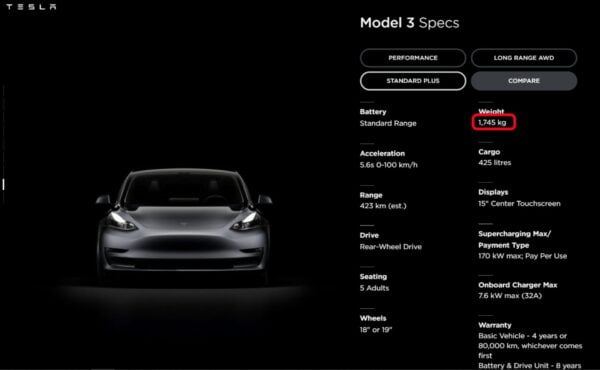 Based on the spec weight of incoming Model 3 units to Canada, u/Sramyaguchi pointed out that Tesla’s Model 3 Standard Range Plus will allegedly be equipped with the company’s new lithium iron phosphate (LFP) batteries.

The post, as shared on the Tesla Motors subreddit, shows a Model 3 SR+ order screen which displays the electric vehicle’s (EV’s) weight as 1,745 kg (3,847 lbs), while the U.S. version of the electric sedan appears to still be outfitted with nickel cobalt aluminum (NCA) batteries.

Last year, Tesla announced plans to switch to cobalt-free batteries in China, and while it will likely phase out the use of cobalt worldwide, it’s still being used for batteries in most markets.

In February, Tesla CEO Elon Musk confirmed that all of Tesla’s standard range cars would be shifting to LFP batteries.

According to a comment on the post’s thread, the weight isn’t the only thing to look at when considering if the line of Model 3 SR+ units will include LFP batteries or not.

Still, after sharing Tesla weight spec information and detailing how it has changed over the course of recent updates, the commenter came to the same conclusion that the new Canadian shipments would include LFP batteries – based on weight differences between China’s new LFP-run Tesla units which seem to corroborate the original post.

Tesla CEO Elon Musk said on Saturday that the company has successfully completed its first 500-mile test drive of a Semi truck with a full load. With its haul, Musk noted that the vehicle weighed in at a whopping 81,000 lbs (or 40.5 tons). Tesla team just completed a 500 mile drive with a Tesla […]
Nehal Malik
14 mins ago

In a recently published YouTube video, Brad Sloan gives us a high-fidelity aerial tour of Tesla’s Gigafactory in Austin, Texas, on the morning of Friday, November 25. While most of the workers had the day off for Thanksgiving, some contractors can still be spotted on the site. A fair amount of ready-to-deliver Model Y units […]
Nehal Malik
18 hours ago