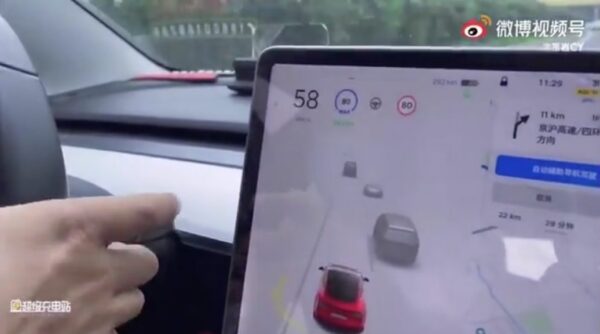 Tesla’s software updates often subtly change the functionality of its cars, and a recent update following a “safety recall” in the country has upgraded the company’s cruise control mode to become more engaging for drivers.

Upon the alert, drivers can then push the lever up to enter TACC mode, while turning the lever down from in the mode cues another audible alert, before turning TACC mode off.

BREAKING: here comes the 1st demo of the completed OTA “recall” in China. Push down the right lever once & you hear the audible sound, alerting you the vehicle is in TACC mode. Lift the lever up to turn TACC off with audible alert. Simple as that.

The news comes following China’s State Administration for Market Regulation calling for a recall of about 285,000 Model 3 and Y units made between December 2019 and June 2021. The recall addressed the potential for drivers to accidentally trigger cruise control, resulting in unexpected speed increases.

On Weibo, Tesla said, “We apologize for the inconvenience caused by this recall to all car owners.” The company continued, “Tesla will continue to improve safety in strict accordance with national requirements.”

Despite the “recall,” which had been requested by Tesla a few days prior, a fix was made in a few days in the form of the OTA update, simply alerting drivers when cruise control is entered or exited.

Even with the apparently negative news, Tesla’s stock price remains unfazed as it is up 2.35% on Monday morning, trading at $687 per share.

Tesla has launched a sunshade for the Model S refresh (2021+) in its online shop, priced at $120 USD. “Constructed from lightweight mesh fabric with a collapsible rigid frame, the Model S Glass Roof Sunshade blocks 66 percent of luminous transmittance. Easily removable, the sunshade is installed onto the interior of the glass roof with […]
Sarah Lee-Jones
11 hours ago

Tesla continues to leverage its in-car notification system to alert owners to charge their vehicles, when there’s a chance electrical grids may be impacted by weather conditions. Full Self-Driving (FDS) beta tester, Chuck Cook, shared a message he received in his Tesla on Tuesday. “In the next 48 hours, a storm is forecast to make […]
Sarah Lee-Jones
14 hours ago