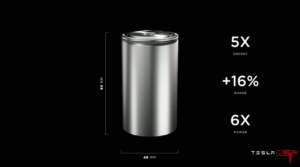 Tesla partner Panasonic has played a major role in the company’s battery production, and the company’s head is now planning to bolster and refine the production of Tesla’s 4860 battery even more so than before.

Panasonic’s latest President and CEO Yuki Kusumi hopes to produce more batteries for Tesla than ever before in hopes to generate billions of dollars to make the company more efficient, as reported by Bloomberg.

Kusumi, who officially became the company’s head on Thursday, hopes to make production more efficient on all levels, from manufacturing to delivery.

With a two-year plan to “sharpen and specialize” Panasonic’s processes – and even shorter than that, if Kusumi gets his way – Kusumi hopes to use the refined production practices as a launching pad for future endeavors, to increase its stake in the global EV battery market.

In an interview, Kusumi said, “It doesn’t matter how much you want to grow sales or increase profit if you don’t have the capacity to do so.” Kusumi continued, “Within our new structure we’re going to polish this ability and if you stay tuned we’ll invest again in building supply capacity.”

Earlier this year, Panasonic acquired Blue Yonder artificial intelligence company for $7 billion (USD), as part of the mission to streamline production and increase overall efficiency at the company amidst a burgeoning electric vehicle (EV) market.

Tesla’s Model 3, Y and S units make up a market share of 26.33 percent of the electric vehicles (EVs) in Denmark, according to data shared by the Danish car imports trade association De Danske Bilimportører (via @Tesla Club Danmark). Out of a total of 105,379 EVs on Denmark’s roads, the data shows that Tesla’s […]
Peter McGuthrie
6 hours ago

As electric vehicles (EVs) continue to gain steam across worldwide markets, one European country known for early adoption of zero-tailpipe-emission vehicles has just reached a new record for single-day deliveries from Tesla. Tesla set a new daily record with 297 vehicles delivered to Norway in one day with Model Y cars from Giga Berlin, as […]
Peter McGuthrie
7 hours ago

Tesla adjusted its Supercharger pricing in Germany and some other European countries again, this time raising prices by six to nine cents per kilowatt-hour at each station, reports @Tesla_Adri, sharing screenshots from @ModelXOlli. Along with the news, Tesla Adri also shared screenshots of the Hilden Supercharger preview on the Tesla mobile app before and after […]
Peter McGuthrie
8 hours ago