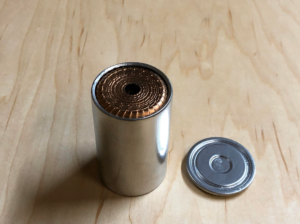 Panasonic is betting on Tesla’s 4680 battery cell, announced last year at Tesla’s Battery Day event and which resembles a small beer or soda can, to bring the rumored $25,000 electric vehicle (EV) to the forefront, according to Bloomberg.

While the battery cell was initially announced with the intent to increase battery cell supply and drive down the price of EVs, the cells are still a few years away from mass production at the very least.

“If Panasonic decides to move forward with producing 4680 cells we will do so on a large scale” — Yasuaki Takamoto, Panasonic’s EV battery head @elonmusk

In fact, some experts have questioned whether the cells are even possible to mass-produce, though Tesla has its sights locked on the new technology.

Transportation and Mobile Analyst at Wood Mackenzie Ram Chandrasekaran said, “There are significant technological issues to get past, issues that many in the industry have been trying to tackle for years” Chandrasekaran continued, “If achievable, these battery cells would be groundbreaking. But the jury’s still out on whether they’re deliverable.”

While Tesla eventually plans to build the 4680 battery cells themselves, they’ll require the assistance of companies like Panasonic until they can actually do so.

Panasonic’s EV Battery Head Yasuaki Takamoto said, “Producing these larger cells requires you raise your craftsmanship one or two full levels or there will be safety issues.” Takamoto continued, saying the company’s time-tested safety-management systems “absolutely give us an upper hand here.”

Tesla’s Gigafactory Texas is reportedly aiming for 75,000 units of the Model Y in the first quarter of 2023, according to an unnamed source who shared the information with electrek. The figure equates to more than 5,000 units per week at the site for the entire quarter, marking a significant production increase from the 1,000 […]
Peter McGuthrie
15 hours ago

Although Tesla currently remains the top electric vehicle (EV) manufacturer in the U.S., a new study shows that increasing competition is slowly chipping away at the company’s market share. Tesla has a 65 percent EV market share in the U.S. in the first nine months of 2022, which is down from 79 percent in 2020, […]
Peter McGuthrie
16 hours ago