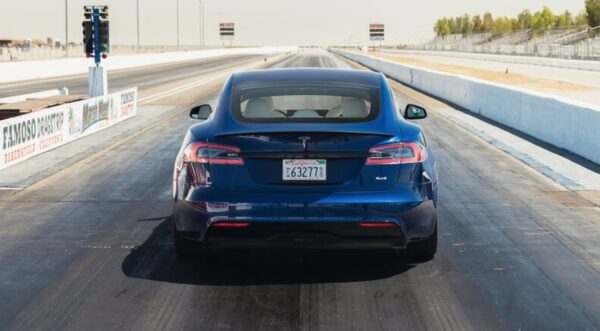 There’s no denying that Tesla’s recently-released Model S Plaid is an incredible car, but in light of recent criticisms about the company’s marketing and communication over the electric sedan, a new report emphasizes a similar trend.

On Thursday, Motortrend reported on its first test of Tesla’s Model S Plaid, conducted at Famoso Raceway near Bakersfield, California – by request of Tesla itself. And while the Model S Plaid did hold true to a 1.98-second 0 to 60, the publication also had to jump through a number of Tesla’s hoops to make it happen.

In most cases, Motortrend conducts its tests at Auto Club Speedway in Fontana, California, with the crew running the drag strip backwards rather than on the prepped VHT resin – so as to better simulate the conditions of the average driver.

After much back and forth, however, Tesla told Motortrend it would need to test the Model S Plaid at the Famoso Raceway outside of Bakersfield, or it could not test it at all. The publication agreed, and when trying to run the Famoso strip backwards, they were forced to use the VHT-prepped surface at the last minute – later agreeing, then also running the tests at the Fontana track the following day.

No matter the location, drivers can use the Tesla Model S Plaid’s infotainment system to select “Drag Strip” mode when performing a quick launch, which heats or cools the batteries in advance for eight to 15 minutes – enabling the proper launch without putting extra strain on the vehicle.

The Model S Plaid did land a 1.98-second 0 to 60 launch on the VHT-gripped Famoso Raceway, though it actually took 2.07 seconds on the normal asphalt – still an impressive speed.

With a starting price of $131,190 – $149,190 for the fully-loaded variant – the Tesla Model S Plaid still performs well under normal conditions, but does require perfect conditions to hit its mind-blowing advertised 0-60mph times.

Tesla announced on Tuesday it has hit a milestone of reaching 10,000 Superchargers in Europe. “Tesla owners in Europe now have access to over 10,000 Superchargers, spread over 30 countries,” said the automaker on LinkedIn. “The European network has already grown more in 2022 than any other year, with still 3 months to go,” said […]
Sarah Lee-Jones
48 mins ago

The Tesla Model Y has become a popular choice on EV car-hire service Evee in Australia, as reported by The Driven. The news makes Evee the first car-hire company to receive the Model Y in Australia, even beating out Hertz and Sixt — the latter of which already has the Tesla Model 3 and the […]
Peter McGuthrie
2 hours ago

Electric vehicles (EVs) are becoming more popular in Europe with each passing quarter, and a new milestone has been reached with one of Tesla’s EVs at the forefront. The Tesla Model Y led Europe’s EV sales year to date through August, with 7,011 units of the electric SUV sold in the month, according to CleanTechnica. […]
Peter McGuthrie
3 hours ago