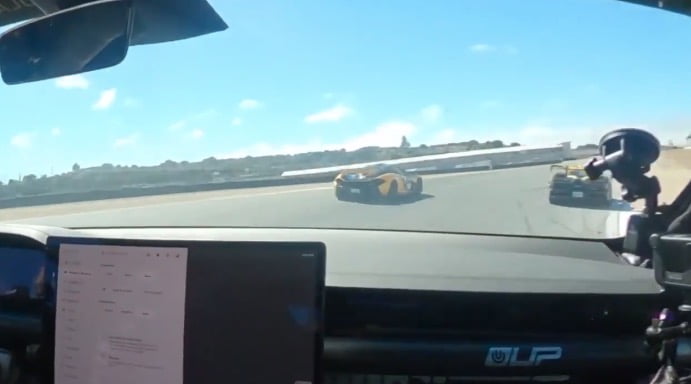 The latest clip shows the Model S Plaid passing some supercars, such as a McLaren Senna, McLaren P1 and Porsche 991 GT3 RS.

Check out the clip below:

“Sustainable energy cars can be the fastest cars, the safest cars, the most kick ass cars in every way. That’s why we did the Plaid.”@elonmusk@Tesla plaid alien technology was unleashed upon McLaren Senna, McLaren P1 and Porsche 991 GT3 RS.
Hardcore smackdown ensues.@klwtts pic.twitter.com/AEruVhR2o8

“GranTurismo Escudo unlocked,” added Unplugged Performance, noting it’s “a reference for all the OG video gamers that remember getting that Escudo and crushing everything effortlessly,” referring to the Suzuki Escudo hillclimb rally car that was available in the PlayStation racing game Gran Turismo 2 from 1999.

Here we have a family sedan at $129,990 USD passing and dominating some million dollar supercars, in the McLaren Senna and P1. The Model S Plaid’s incredible acceleration shows on the straightaway.