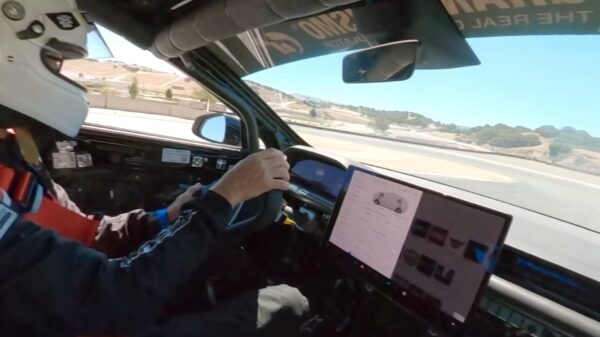 On Monday, we spotted Randy Pobst and the Unplugged Performance team racing its new Tesla Model S Plaid at the Laguna Seca raceway, and a new video shows the driver going very fast from inside the car.

In new footage uploaded from Monday’s run, Unplugged Performance shared footage from inside Pobst’s Model S Plaid front seat, in which the car goes over 150 mph.

In the video’s description, the Unplugged Performance team says that their focus was on fine-tuning the Tesla Model S Plaid, ahead of this year’s Pikes Peak International Hill Climb, a gran turismo race down Colorado’s Pikes Peak.

In the video’s description, the team wrote, “Our goal during the weekend was not to set records, just to gather data and further develop and dial in the car ahead of Pikes Peak. We will return to Laguna Seca and set some records after Pikes Peak.”

Tesla officially released the highly-anticipated Model S Plaid at a delivery event last week, after being delayed from June 3, automatic shifting, and complete with its own Plaid badge, and a handful of merch for those who attended the event.