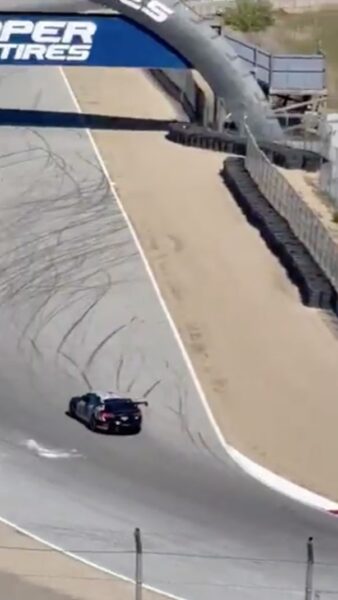 Tesla’s Model S Plaid Delivery Event was last week, and the electric luxury sedan has already been picked up by the Unplugged Performance team as it starts preparing for the 2021 Pikes Peak International Hill Climb.

Randy Pobst and the Unplugged Performance team were spotting racing a Model S Plaid at the Laguna Seca Raceway for the Hypercar Invitational on Sunday, according to a post from OMG_TESLA.

The UP team announced “going plaid,” on Saturday, and the footage from @omg_tesla shows a brief clip of the team’s Model S Plaid coming in hot around some corners, while then surging into the lead along the straightaway.

Last year, Pobst was sporting a decked-out Tesla Model 3 for the Pikes Peak Internation Hill Climb and tragically crashed during the race. In a recently-released documentary, Pobst and the Unplugged Performance team talk about preparing for the race, and the moments leading up to the crash itself.

This year’s Pikes Peak International Hill Climb race is scheduled for June 27, and will take place at Pikes Peak in Colorado. The race will mark the annual competition’s 99th year running, while electric cars have only participated in the race for the last few years.

Last year, Tesla Model 3’s were driven in the Pikes Peak International Hill Climb by Pobst, Josh Allen, and Blake Fuller, who went on to win the race – following a 2016 victory in a Tesla Model S, marking the first electric car to win in the race’s history.