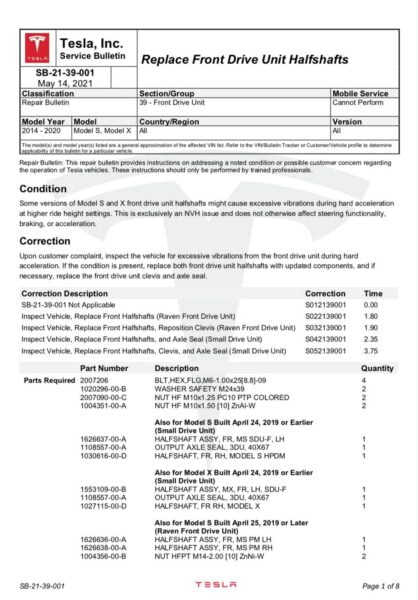 On Tuesday, @greentheonly discovered and shared a Tesla service bulletin for the so-called ‘acceleration shudder’ on Tesla’s Model X and S units. Tesla titled the bulletin “Replace Front Drive Unit Halfshafts,” adding that all 2014-2020 S and X units could be affected by the issue.

While Green and a number of users commented on the thread saying the fix was likely a “temporary fix,” it’s unclear as of yet if the problem will be completely solved from service or if it will simply be a band-aid solution.

And finally there's a service bulletin for so called "acceleration shudder" on S/X cars. pic.twitter.com/qQakurZRZa

In response to another user sharing their experience with the acceleration shudder issue going away after service, then coming back “less pronounced,” Green mentions that “software mitigation” could be a part of the reason why that happened.

In a series of follow-up tweets, Green wrote, “There’s also software mitigation in the code which might contribute to shudder being less pronounced.” Green continued in a later tweet, saying, “when shudder is detected mitigations kick in. you can find some threads on TMC of people discussing it.”

Earlier this year, a number of U.S. Model S/X units were recalled over bricked screens. Tesla has faced a number of recalls and service requests before, including reimbursing some Model S and X users for certain repair costs.