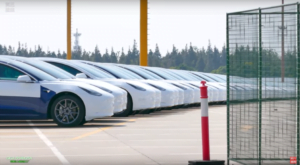 A ship carrying 1,500 Tesla Model 3 units is unloading its stock this month at Israel’s Ashdod port, according to Al-Monitor.

This particular delivery is six times as large as the U.S. automaker’s order in March, and the total amount equates to the amount sold by GM Audi, Renault, Jaguar, Nissan, Mercedes, Mini and others combined through all of 2020.

China is the primary exporter of Israel’s EVs from Tesla, with the company’s Gigafactory Shanghai producing the Model 3 units being brought into the country. In addition, Israel plans to bring in as many as eight new Chinese EV brands within the next two years.

Last month, Tesla buyers in Israel were notified that deliveries may arrive sooner than expected, originally set to happen in June, and now being moved up to May.

While Israel may see over 3,000 EVs in Israel over the next few years, the country has just recently built its first Tesla Supercharge in Tel Aviv. As EVs become more common in Israel, the country will still have a ways to go to effectively bolster its EV charging infrastructure.