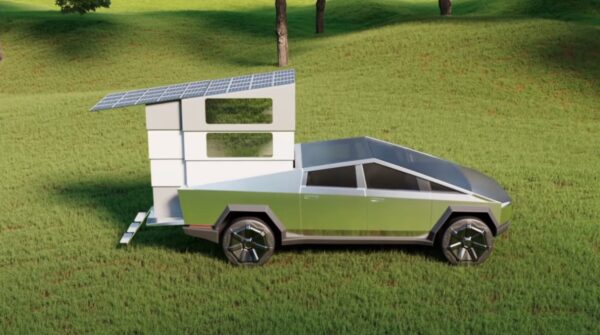 Stream It, Inc.’s CyberLandr futuristic camper for the Tesla Cybertruck has exceeded $50 million in preorders with more than 1,000 preorders in just 15 days, according to a press release from the company.

The Cybertruck camper includes a bedroom, living room, kitchen, and bathroom while in use, and disappearing entirely when it’s being stowed or transported.

The CyberLandr comes just ahead of Tesla’s Cybertruck, which is expected to begin production this summer.

Over 1,000 preorders in 15 days. Couldn’t thank all supporters enough. This is a huge milestone for us here at Cyberlandr!https://t.co/qUFNqvzQb2

With CyberLandr’s preorders still growing even beyond the $50 million mark, the company expects that fewer than 10% of Cybertruck reservation holders have seen CyberLandr in the weeks since the camper’s unveiling.

Stream It, Inc. CEO and Lead Designer of CyberLandr said, “We conservatively estimate demand for CyberLandr at more than 10,000 units in 2022. This is why we are working with renowned lean manufacturing consultants Munro & Associates to help ensure high quality while we scale manufacturing to meet demand.”

Because of its ease of use, the co-founders of the CyberLandr expect that the camper will be used 2-3 times more than a traditional RV.

While it’s not entirely clear when Tesla will be able to begin Cybertruck production, it’s expected and rumored to start in June at Gigafactory Austin. Earlier this month, Tesla CEO Elon Musk was seen driving a Cybertruck around Gigafactory Texas.

As Elon Musk says, prototypes are easy but production is hard. It remains to be seen if CyberLandr can deliver on its promise from concept to reality, as $50 million in orders so far is insane.

Thailand has been one significant expansion project from Tesla in recent months, and now the automaker is launching some of its first fast-charging stations and a new retail store in the country. Tesla is preparing to launch the first V3 Supercharger station in Thailand, located on the B1 floor of the CentralWorld shopping complex in […]
Peter McGuthrie
21 hours ago