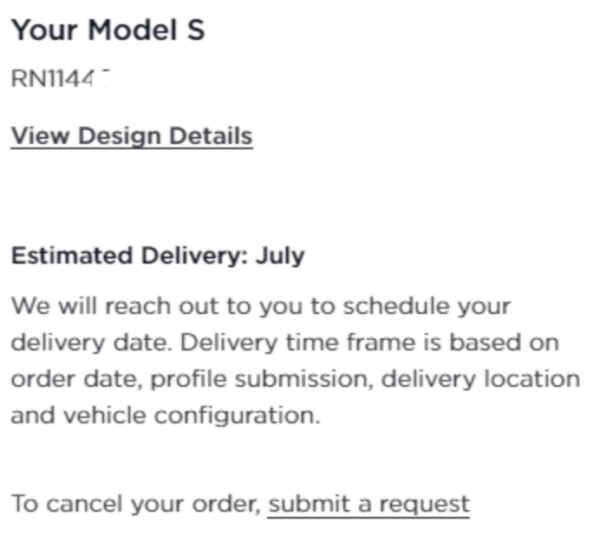 Tesla has been known to delay its plans from time to time, but a recent delivery delay of the company’s newly-refreshed Model S has Tesla fans wondering what could have caused such a major delay.

In a post on Reddit’s Tesla Motors subreddit, one user shared that their original Tesla Model S order, placed February 5th, 2021 in California, has updated the estimated delivery from previously saying March to now say the vehicle will be delivered in July.

One user on the thread commented that the fact of so many orders being pushed back to the middle of the year may “indicate some real issues.” The user went on to say that, despite all the testing and work Tesla has already been putting into its Model S, “something in this new recipe isn’t working,” and that “radio silence from [CEO Elon] Musk is deafening, as is the lack of any kind of update.”

While it’s unclear what has caused the delay, major semiconductor chip shortages hit most automakers throughout the world earlier this year, even eliciting a call for increased US EV part manufacturing from Ford CEO Jim Farley.

Tesla CEO Elon Musk has spoken out in regards to his agreement to buy Twitter on the original terms, after news broke on Tuesday morning. Musk said just now, “Buying Twitter is an accelerant to creating X, the everything app.” When asked if it would be easier to build X from scratch, Musk replied, “Twitter […]
Sarah Lee-Jones
16 hours ago

Tesla has announced it will be removing ultrasonic sensors from its vehicles, the next step of its camera-based Tesla Vision Autopilot. “Today, we are taking the next step in Tesla Vision by removing ultrasonic sensors (USS) from Model 3 and Model Y. We will continue this rollout with Model 3 and Model Y, globally, over […]
Sarah Lee-Jones
18 hours ago

Tesla announced on Tuesday it has hit a milestone of reaching 10,000 Superchargers in Europe. “Tesla owners in Europe now have access to over 10,000 Superchargers, spread over 30 countries,” said the automaker on LinkedIn. “The European network has already grown more in 2022 than any other year, with still 3 months to go,” said […]
Sarah Lee-Jones
20 hours ago