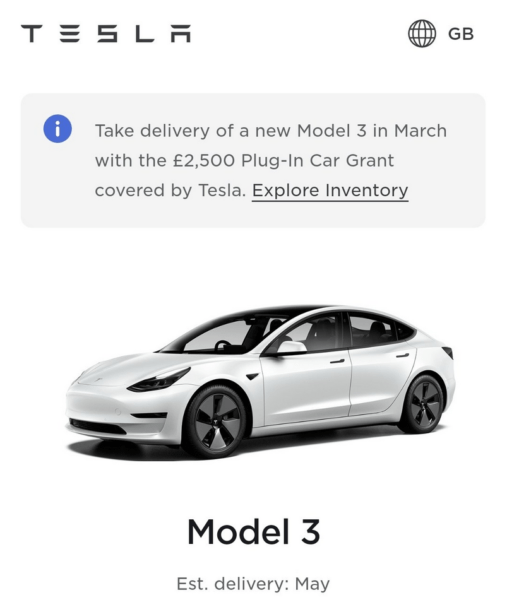 The UK government recently reduced the max price of plugin grant-eligible cars to £35,000 ($48,543 USD), effectively removing Tesla’s Model 3 from the government grant’s eligibility. However, new buyers may have one last shot at getting access to savings on the Model 3, thanks to a new move from the US-based company.

Since the UK government excluded the model 3 from the electric vehicle grant by reducing the max. price of a eligible car to £35000, tesla is covering the difference (£2500) if you take delivery in March. @WholeMarsBlog @DriveTeslaca @28delayslater pic.twitter.com/GUnmtaJ4ih

In December, the Tesla Model 3 was the UK’s best-selling new car, and it’s landed similar statuses in countries throughout the world. In other countries like China, which is also the world’s largest auto market, the Model 3 is still eligible for exemptions from extra charges like purchase tax, as countries attempt to encourage mainstream adoption of electric vehicles (EVs).

Earlier this month, US Senate Majority Leader Chuck Schumer re-proposed a 2018 plan, in which he suggested replacing every gas car in the US with an EV. Tesla has also been steadily increasing the price of the Model 3 in recent months, with the US seeing the price of both its Standard and Long Range Model 3s increase by $500 USD earlier this month.

For those who were already close to purchasing Tesla’s Model 3 in the UK, this may just be the tipping point – and a worthy one, at that, since buyers stand to save £2,500 for a limited period of time.

U.S. May Turn to Canada for EV Battery and Mining Needs, Report Says