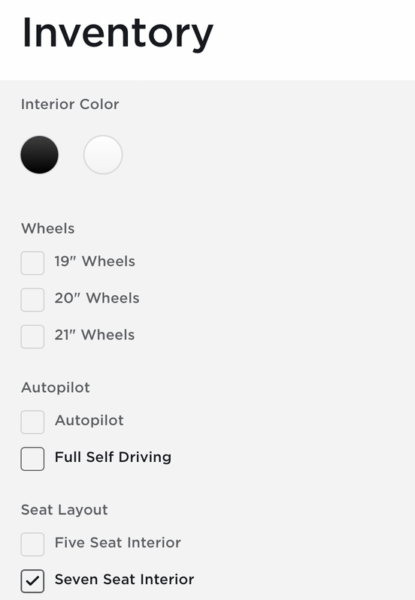 Now, buyers can search Tesla’s inventory page for the 7-seater Model Y, with a new checkbox to sort by the seven-seat interior option (via Reddit). While demand for the Model Y is high right now, users can keep their eyes on the page and sort by the 7-seater option to, hopefully, catch them as they’re uploaded to the page.

One Reddit commenter reports that Tesla may be trying to sell off its demo versions of the new Model Y, which could explain the addition of the seven seat interior to the company’s inventory page. Another commenter on the thread shared that one had been available on the company site’s inventory page near Orlando, Florida.

Even with a $1,000 price jump for the Model Y crossover reported Wednesday, demand for all of Tesla’s vehicles remains high. The current auto market, pointing its sails towards electric vehicles (EVs), also saw a major semiconductor chip shortage in recent weeks, which also in part explains heightened demand.

In China, Tesla Model Y sales surged in February following a major price drop, which had the US company outselling its rivals after a slow January.