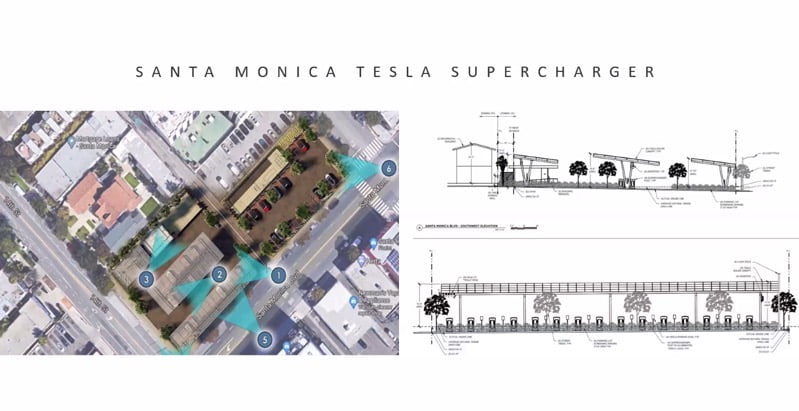 Tesla has plans to build a new Supercharger in Santa Monica, California, with a whopping 62 V3 stalls, which would make it the largest V3 Supercharger site in the world (China has a 72-stall Supercharger, but it’s all V2).

Previously, TeslaClubLA announced a flash event for the Santa Monica Supercharger Discussion. That was held earlier on Monday evening from 6:30pm to 7:30pm PST. The goal of the Zoom meeting was to brainstorm ideas to lobby Santa Monica City Council to approve the new project.

This evening, @BLKMDL3 shared a couple of videos of the proposed site, which you can check out below:

According to @TeslaJoy, who attended tonight’s Zoom meeting, the plans detail a lounge on-site (similar to the Kettleman City Supercharger), plus lots of trees for shading at the site, 21 in total, consisting of peppermint trees and Chinese palms, for example.

To help meet the demand for Supercharging leading up to the construction of this new Central Santa Monica Supercharger, “Tesla will deploy a number of mobile chargers like the one I found in Culver City. The Culver City mobile charger is the first one they launched in [the] LA area,” details @TeslaJoy.

Construction on the site would be slated to start mid-summer 2021 and the second phase planned for late 2021.

Santa Monica City Council will be holding a conditional use permit hearing on March 3, 2021 at 5:30pm PST. According to @TeslaClubLA, owners are encouraged to write in comments of support for the project and explain how it will benefit you, especially if you live in Santa Monica. You can send emails with comments of support to:

California is one of the largest EV markets in the world and most important for Tesla, and also home to the company’s Fremont factory. This proposed Supercharger would help alleviate charging wait times for Tesla owners in busy Santa Monica.