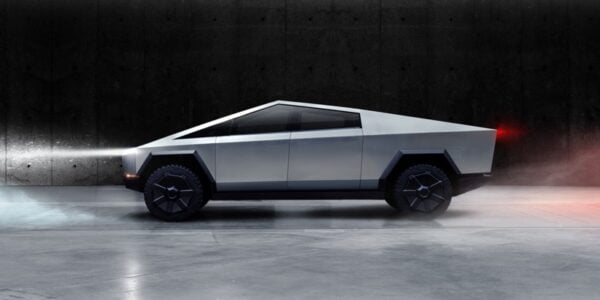 For many electric vehicles (EVs), the design goal has to make them look as close to traditional gas cars as possible. However, among some of the world’s more unique EVs is the Tesla Cybertruck, a futuristic electric pickup truck, set to be the company’s very first of its kind.

In a tweet responding to Tesla Owners of Silicon Valley, Tesla CEO Elon Musk confirmed that the Cybertruck is in its final design form, and that he had just been in the studio to see it. While the original poster followed up, requesting pictures from Musk, the CEO did not elaborate further, naturally.

The Tesla Cybertruck is set to release later this year upon the company’s completion of Gigafactory Texas, and while it was spotted at last year’s Battery Day event alongside the company’s ATV, Roadster, and Semi, it hasn’t been shared with the public since.

Final design is looking👌
Was just in the studio

However, Musk has said that the Tesla Cybertruck floats and doesn’t need a garage, both of which are… good to know. The huge silver tank-like body looks impenetrable, and hopefully it is, if it’s anything like what Musk is describing.

You can watch an interview with Jay Leno and Elon Musk, when both men take the Cybertruck for a ride into one of the Boring Company’s tunnels.

Regardless, the vehicle is now in its final form, and this means Cybertruck pre-order holders can rest knowing it’s one step closer to being ready for mass production later this year.

A 30-foot long, 12,000 lb metal sculpture featuring Elon Musk’s face atop the body of a goat riding a rocket has been spotted on the streets of Austin, Texas (via Fox Business). The statue was commissioned by a group of cryptocurrency enthusiasts who created a project called the “Elon Goat Token.” They wanted the sculpture […]
Nehal Malik
16 hours ago

Tesla CEO Elon Musk said on Saturday that the company has successfully completed its first 500-mile test drive of a Semi truck with a full load. With its haul, Musk noted that the vehicle weighed in at a whopping 81,000 lbs (or 40.5 tons). Tesla team just completed a 500 mile drive with a Tesla […]
Nehal Malik
20 hours ago