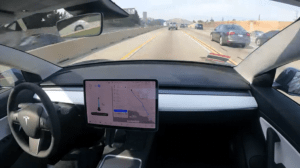 On Tuesday, Whole Mars Catalog released a blog and video about Omar’s Tesla Model 3 driving back to Silicon Valley from Los Angeles, and the car again completes the trip with zero interventions.

In recent statements, Tesla CEO Elon Musk has said he is “extremely confident” that Full Self-Driving will see a full release in 2021. Mirroring the sentiment, Omar goes on to say that he believes Tesla will release a taxi service in 2021, at least in certain startup locations.

Tesla Full Self-Driving will work at a safety level well above that of the average driver this year, of that I am confident. Can’t speak for regulators though.

This claim goes a long way, especially coming from someone who just drove from the Bay Area to LA and back without using the steering wheel or gas pedals at all. The gravity of someone’s ability to do that is tough to grasp, and yet, we’ll begin seeing more and more of these kinds of trips in the years to come – and soon enough they’ll be available to the average consumer.

You can watch the full trip from LA to Silicon Valley from inside Omar’s Model 3 below:

Tesla CEO Elon Musk has spoken out in regards to his agreement to buy Twitter on the original terms, after news broke on Tuesday morning. Musk said just now, “Buying Twitter is an accelerant to creating X, the everything app.” When asked if it would be easier to build X from scratch, Musk replied, “Twitter […]
Sarah Lee-Jones
32 mins ago