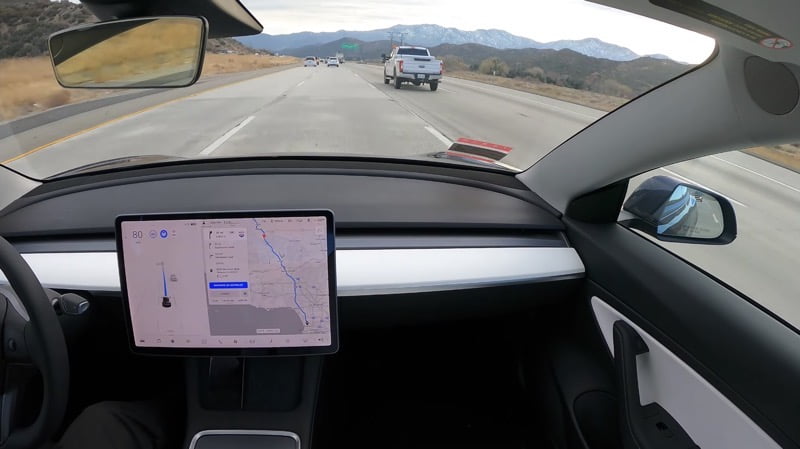 Tesla’s Full Self-Driving (FSD) beta has made its way from San Francisco to Los Angeles—without any interventions.

That’s according to the latest video shared today by Whole Mars Catalog, also known as Omar Qazi. The journey from San Francisco to Los Angeles is a 381 mile drive (613 km) and according to Qazi, he was able to complete the drive running FSD beta without any interventions.

“In a long-anticipated autonomy milestone, the latest build of Tesla’s Autopilot FSD Beta has driven from the streets of San Francisco all the way into Los Angeles with no human intervention. As far as we’re aware, this is the first known and recorded instance of Tesla’s Autopilot FSD beta driving from San Francisco all the way to Los Angeles without a single intervention,” explains Qazi.

The Model 3 owner says “the drive was not perfect”, but he had to share the impressive milestone. Qazi stopped at Superchargers in Firebaugh and Kettleman City to charge up along the drive, simulating what a family might do on this road trip. He says “it would also be great if someone with a 400 mile Model S could attempt to do an FSD drive between SF and LA with no charging stops.”

Qazi previously shared the same drive from San Francisco to Los Angeles back in November, with that drive requiring only five interventions.

Today is the last day of 2020 and Tesla owners taking deliveries today will get three free months of Full Self-Driving, says the company. The perk was a last-minute incentive aimed at helping Tesla achieve 500,000 deliveries in one year. We’ll find out in the coming days if that milestone was reached by Elon Musk and company.

Tesla’s first software update of this year, 2023.2.0.5, recently started rolling out, bringing new features to the heated steering wheel and Sentry Mode, plus more But there are also some undocumented changes as with most software updates, according to tips sent to Not A Tesla App. One of them was the new ability to view […]
Peter McGuthrie
13 hours ago

Tesla has added a “camera preview” feature to the vehicle’s service menu, as spotted this week by @Stian Walgermo. The feature came as an update to Tesla’s software in version 2023.2.0.5, most of the new features of which were simply minor fixes. The feature shows a simple view from the camera, without having to use […]
Peter McGuthrie
17 hours ago

Recent weeks have brought on conversations about Tesla’s price cuts in markets around the world, and now the automaker is pushing a new message on its website for Model 3 leasing. Tesla’s Model 3 is now leasing at prices as low as $399 per month, according to a change on the automaker’s website yesterday, notes […]
Peter McGuthrie
19 hours ago