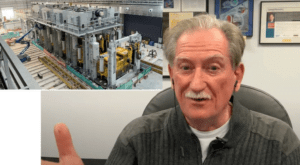 We all know about Tesla’s GigaPress casting machine by this point, but according to auto expert Sandy Munro, Tesla has more of them than just the one – in fact, they have eleven more of them.

In a recent interview with Munro, host All Things EV Podcast host Sean Mitchell asked Munro about Tesla’s GigaPress casting machines (via TechAU). When prompted, Munro said, “I found out through the grapevine that they bought 11 more of those casting machines.”

Munro doesn’t share a source, though his expertise in the auto industry should make the “grapevine” source enough. Currently, there are operational GigaPress machines currently at the Fremont and Shanghai factories, though where the remaining machines will land is unclear.

With Tesla’s current push to manufacture as many Model 3s and Ys as possible by the end of Q4, it’s ceasing operations on the Model X and Model S starting December 24th. Some have speculated that this time will be used to switch from their current body shop to a new, GigaPress shop, with the potential inclusion of its 4680 tabless cells. Still, these ideas are only speculation thus far, and only time will tell what the gap in X and S production really means.

Watch the full interview with Sean Mitchell and Sandy Munro below about what the auto industry isn’t telling you about Tesla: