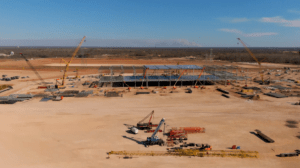 Tesla has a lot going on around the world, with construction operations in both Germany and the US, along with a new, surprise expansion out at Gigafactory Shanghai.

In the US, Tesla’s Gigafactory Texas is making room for the 2021 release and delivery of its Cybertruck, a highly-anticipated electric vehicle (EV) that will be built at the factory.

Additionally, the steel beam structure in the video, the site’s first building to-be, is still receiving ongoing construction work and is inching closer to becoming an actual building.

We can also see a lot of new activity going on in between the first building and the interstate, where it looks like construction workers may be preparing the land for the next big project.

At any rate, Tesla’s Gigafactory Texas will mark a huge win for the company’s production ability to keep up with demand. Even with other US Gigafactories in both Fremont, California and Sparks, Nevada, the company still has a super high demand, and needs to up its production capacity to stay with it.

Tesla has launched a sunshade for the Model S refresh (2021+) in its online shop, priced at $120 USD. “Constructed from lightweight mesh fabric with a collapsible rigid frame, the Model S Glass Roof Sunshade blocks 66 percent of luminous transmittance. Easily removable, the sunshade is installed onto the interior of the glass roof with […]
Sarah Lee-Jones
4 hours ago

Tesla continues to leverage its in-car notification system to alert owners to charge their vehicles, when there’s a chance electrical grids may be impacted by weather conditions. Full Self-Driving (FDS) beta tester, Chuck Cook, shared a message he received in his Tesla on Tuesday. “In the next 48 hours, a storm is forecast to make […]
Sarah Lee-Jones
6 hours ago