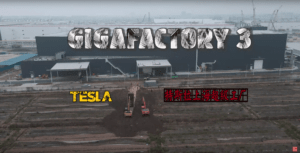 Even as Tesla has factories under construction in the US and Germany, it’s continuing work on its Tesla Shanghai factory which was technically finished earlier this year.

On Thursday, a new video was released on YouTube channel 特斯拉上海超級工廠, depicting the Tesla Shanghai Gigafactory, which has begun expanding its operations eastward. While it’s not clear what exactly the expansion is for, it has begun and will likely be revealed soon.

Whatever the outcome of the space may be, the expansion will likely help increase production for Tesla, in order to help meet demand.

Tesla also has plans to build an entirely separate factory, with the intention of building a number of Superchargers. While the expansion at Giga Shanghai may somehow be related, a previous interview with Tesla executives signaled that the Supercharger factory may not even end up in Shanghai.

In any case, it should be exciting to see what the new land will become, and it won’t likely be long.

Tesla’s big AI Day 2022 is here and it is slated to start at 6:15pm PDT/9:15pm EDT from Palo Alto, California. The event is to recruit engineers to “build the future of AI”. According to the AI Day invite, attendees will “learn about Tesla’s latest developments in artificial intelligence, including Full Self-Driving, Tesla Bot, Dojo […]
Sarah Lee-Jones
3 hours ago

A set of photos shared this week show that Tesla’s Powerwall and Solar Roof are super durable and will continue working after exposure to storms, as noted by one roofing company. @Tesla retweeted photos of a Tesla Solar Roof and Powerwall that withstood winds and rain from Hurricane Ian on Thursday. The photos, originally shared […]
Peter McGuthrie
4 hours ago

Tesla’s global production of the Model Y and 3 is set for a sharp increase in Q4 with expectations of major growth in 2023, according to internal plans reviewed by Reuters this week. The growth is expected to happen due to Tesla’s Giga Berlin and Texas ramping up production substantially, putting the company on track […]
Peter McGuthrie
5 hours ago