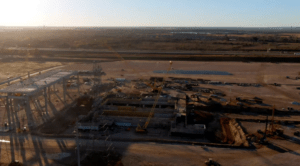 Tesla has been busy, with factories going up in Berlin and in Austin, while still managing deliveries to customers around the world. A new update shows us that Gigafactory Texas is coming right along, and is still on track to complete its goals.

In a video uploaded Monday by YouTube channel Jeff Roberts, Jeff shows viewers the days leading up to the present at Tesla’s Gigafactory Texas, then sharing drone footage of the construction site and its progress. Much progress has been made as we see in comparing the current shots to shots leading up to this point, and it looks like the footings for the next structure are just about completed.

In Jeff’s last video, at 124 days, we saw a similar sight to what we see below: mostly, the first structure beginning to be built up, and the footings in place for the next major structure, all before the anticipated “December dry-in.”

Gigafactory Berlin just encountered a standstill to its deforestation operations, due to a number of hibernating snakes in its construction area. While Giga Texas has not experienced any such standstill, it has been reported that the Cybertruck will now be delivered later in 2021 than previously thought.

Gigafactory Texas is set for completion in May 2021, with deliveries beginning to go out very shortly after.