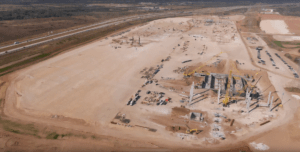 Tesla currently has factories being built in both Austin, Texas and Berlin, Germany, and it’s even doing talks with other countries about expanding in various ways over the next few years.

In a video uploaded Monday, YouTube host Jeff Roberts shares drone footage of Tesla’s Austin, Texas Gigafactory construction site. He also includes a number of shots leading up to the date, showing how far the site has come in just 124 days.

The progress update comes in anticipation of December dry-in, when the site will begin seeing concrete frameworks begin being poured. In the video, we can see steel beams and other columns begin to be erected, an exciting measure for the factory-to-be.

The electric vehicle (EV) factory will be home to a major production facility, and down the line the company has plans to mine its own lithium and produce its own battery cells, what will likely be called Tesla’s Terafactory.

Check out the cool video shot with a drone below. What a time to be alive to be able to see construction as it happens:

The company’s ambitious progress on the construction site shows just how quickly it wants the world to embrace zero-emission vehicles. Its EVs are on the rise worldwide, and they’re even inspiring other companies to take up the cause of sustainable transportation.

Tesla’s Texas Gigafactory site is set for completion by May 2021, with deliveries of the highly-anticipated Cybertruck going out upon completion.