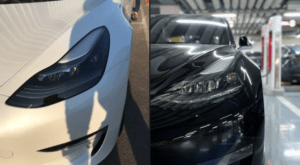 One of the major upgrades of the Tesla 2021 Model 3 Refresh is in its headlights. The new headlights project a light beam that is both brighter, more-focused, and wider than the previous light, a substantial increase in driver safety. And now, we have seen the refreshed headlights in a new, upcoming Model 3, and it’s looking great.

New Tesla Model 3s produced at Tesla’s Giga Shanghai factory are being produced with the newly-refreshed headlights, as reported by Twitter users @JayinShanghai and @xiaoteshushu. The new Model 3 headlights, which include an upgraded, projector-looking back headlight, have been seen in the UK.

Tesla’s Giga Shanghai recently gained approval from China’s Ministry of Industry and Information Technology to begin selling the highly-anticipated Model Y. The company is also working on a major Supercharger plant in China in addition to its car manufacturing plant. The Supercharger plant is expected to be able to produce as many as 10,000 annually.

In any case, the world’s acceleration towards an age of zero-emission vehicles is rapidly advancing. On the cusp of climate crisis, any upgraded features which can help incentivize consumers into buying electric is a win in our book.

Tesla’s brand retains customers better than other automakers, and it tends to steal customers from other brands, according to new data shared by S&P Global Mobility last week (via @Umbisam). The data measures a 12-month period leading up to July 2022, looking at how drivers purchased — whether switching to a new brand, or remaining loyal […]
Peter McGuthrie
5 hours ago

Tesla is offering a new discount that could slash prices even further for previous brand owners, with a new trade-in deal available for new Model S and X vehicles. U.S. buyers of the Model S and X who trade in an old Tesla vehicle are now eligible to receive $3,000 off the price tag or […]
Peter McGuthrie
6 hours ago

Tesla has made a Twitter account for its Megapack commercial battery packs, showing as @Tesla_Megapack, and in the bio it says “large-scale energy storage,” as first spotted by @SawyerMerritt (via @Tslachan). At the time of writing, the account has yet to make any posts, has about 1,390 followers and only follows three other accounts: SpaceX, […]
Peter McGuthrie
6 hours ago