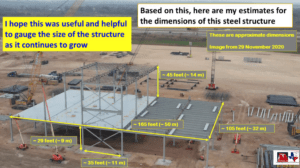 We’ve been keeping close track of construction on Tesla’s Gigafactory Tesla site, with a number of drone videos coming to light week after week.

In the most recent video uploaded on YouTube by Joe Tegtmeyer, we see a number of exciting updates through drone footage of Tesla’s Gigafactory Texas construction site. Most notably, Joe provides some rough measurements for the dimensions of the large steel structure on the site, estimating based on surrounding objects.

Additionally, the video also depicts new sections added to the large steel structure, new materials arriving onto the site via semi, and new concrete beam installations, among other things. New footings have also been spotted all around the site, both large and small, likely in preparation for some vertical construction very soon.

As Tesla Gigafactory Texas comes together, it’s nice to recall that within the year we will likely see Cybertrucks and Model Ys being delivered from this factory. While plans were originally set to have the Cybertruck completed and delivering as early as May 2021, new estimates garnered from an email to Cybertruck reservation holders suggests that production may begin closer to the latter half of 2021.

Regardless, Giga Texas is coming together quite nicely, and very soon we’ll begin to see the construction of actual, enclosed buildings – an exciting sign of what’s to come in 2021.