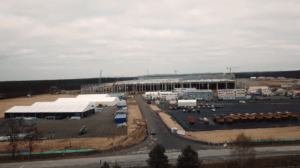 Progress on Tesla’s upcoming Gigafactories is coming quickly, and especially for the company’s Giga Berlin location, currently being built in Brandenburg, Germany, just outside of Berlin.

In a new video uploaded Tuesday by YouTube channel Teslair, drone footage is shown breaking down new updates of Tesla’s Giga Berlin construction site, with a particular focus on the site’s west side. The video is also shown just before the company is set to begin phase two of deforestation on the land in order to accommodate pipeline needs.

The video shows a number of new updates to the construction site, as well as offering the best view of the factory’s first multi-level concrete structure, likely to become the factory at large.

The harvesters began with their work. In the next days 82,8Ha of industrial pine tree forest will be cleared at #GigaBerlin. pic.twitter.com/oEYTzHVViY

Yesterday, Teslair shared a video of inside Giga Berlin, the clearest video we’ve seen of the site.

Tesla’s Giga Berlin is expected to be completed and delivering vehicles to customers across Europe by 2021. For now, European customers are receiving imported units from Tesla’s Giga Shanghai until the Berlin factory is finished.

As Tesla continues to make progress on its factories in Germany and the USA, along with the completion of its new Chengdu, China service and delivery centers and a number of new showrooms and Superchargers worldwide, it will also continue to dominate the electric vehicle (EV) market, at least until other companies can get some zero-emissions cars on the road.

Tesla has increased delivery wait times for all models except the entry-level Model Y in China to 4-8 weeks — reports CnEVPost. The move is in stark contrast with delivery timeline changes made by Tesla in recent weeks, which cut wait times down significantly. For some models, Tesla managed to bring delivery times down to […]
Nehal Malik
17 hours ago

If you’re planning to finance your next Tesla purchase in the United States, rates have increased to kick off the fourth quarter. As noted by Waiting4Tesla.com (@w4tsla), financing rates for Model S/X and Model 3/Y on the Tesla website in the U.S. have increased 0.25%, now showing as 4.74% (previously 4.49%). Tesla partners with major […]
Sarah Lee-Jones
21 hours ago

Tesla on Friday held its annual AI Day event to showcase the company’s latest leaps in Artificial Intelligence, automation, and computation. The event kicked off with Tesla showing off the first working prototype of ‘Optimus,’ the long-awaited Tesla Bot. Despite merely being a prototype, Optimus was able to walk out on stage, wave to the […]
Nehal Malik
23 hours ago