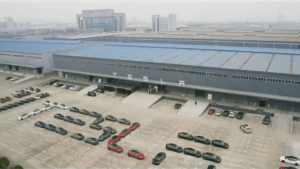 While Tesla has been building factories, showrooms, delivery and service centers, and charging lots all around the globe, a new service and delivery center in the world’s biggest electric vehicle (EV) market is particularly exciting news.

On Tuesday, it was reported that Tesla’s new delivery and service center location in Chengdu had held its grand opening, spelling out the word “Tesla” with its own EVs to celebrate, as reported by Tesmanian (save 10% off floor mats and more with coupon code TESLANORTH10).

The location will deliver hundreds of vehicles per day, finally giving Tesla a sliver of hope to keep up with demand for its EVs.

While Giga Shanghai has significantly increased production of the Model 3 to fulfill the entire Asian, European, and Australian markets, it will soon begin producing and exporting the Model Y – both of which require a delivery center to facilitate the production to delivery stages of the cars’ building.

Tesla has also shared plans of separate compact cars built specifically for Chinese and European markets, the former of which is supposed to come out of Giga Shanghai within the next three years, according to CEO Elon Musk.

While the service and delivery center will likely be a gamechanger for the company’s operations in China, another gamechanger will come summer of 2021, when Giga Berlin is completed – this will mean that Giga Shanghai no longer has to export for the European market, and will be able to produce cars almost entirely for its own continent.

More electric vehicles (EVs) are set to be sold in China this year than throughout the rest of the world combined, according to an exposé from The New York Times on Monday. As many countries struggle to incentivize EV sales using tax credits and subsidies, China’s customer base has already begun to pivot toward the […]
Peter McGuthrie
21 hours ago

A coming software update has added a useful pop-up feature for Tesla’s Superchargers, showing new details that weren’t previously included. Tesla software update 2022.36 includes a newly designed pop-up map feature for Supercharger locations, as detailed by Not a Tesla App on Monday. The pop-up map includes information such as the number of available charging […]
Peter McGuthrie
21 hours ago

Tesla’s official CCS Combo 1 adapters have begun delivering to customers, as noted on Monday by a Model 3 owner (via Reddit). The CCS adapter costs $250 in the U.S. and $325 in Canada, offering up to 250 kW at third-party charging stations where Tesla’s proprietary Supercharger connections aren’t available. Tesla launched official sales of […]
Peter McGuthrie
22 hours ago