Drone Films the Inside of Tesla’s Gigafactory Berlin [VIDEO] 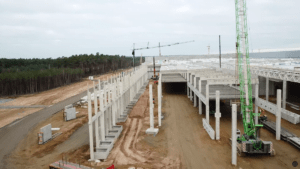 As Tesla races towards 2021 factory completions in both Berlin, Germany, and Austin, Texas, its construction sites are actually coming together and starting to look like Tesla plants.

A new video uploaded Saturday by YouTube channel Teslair shares an inside look at Tesla’s under-construction Giga Berlin site. The video shares drone footage from within and around the construction site’s newest facility, currently just a set of steel columns with a roof or another floor on top.

We also reported recently about the factory producing up to 250 GWh worth of battery cells someday, once the battery cell facility is completed. The initial completion of the electric vehicle (EV) factory is set for summer 2021, though it is not clear when the factory will be ready to produce its own batteries too.

Giga Berlin is likely only a few weeks away from starting to see some concrete dry-in pouring action, especially as we see this first building coming together. The video shows how tall the columns really are with a number of shots of cars, trucks, and vans parked beside the structure.

While Tesla works on its Gigafactories in both Germany and the US, fans and onlookers alike have a lot to look forward to next year – 2021 will bring with it the completion of both of these factories, the Cybertruck, the Model S Plaid, and hopefully a handful of other fun surprises from Tesla too.

Commenters on YouTube said it was dangerous to fly this close inside the job site. That’s when Teslair responded, “Those are valid concerns and I wouldn’t want to be the one responsible for that sort of things, but I did speak to the security patrol and was allowed to fly that day. I also never flew it under an enclosed roof, just close to the buildings to take a look inside.”

In a recently published YouTube video, Brad Sloan gives us a high-fidelity aerial tour of Tesla’s Gigafactory in Austin, Texas, on the morning of Friday, November 25. While most of the workers had the day off for Thanksgiving, some contractors can still be spotted on the site. A fair amount of ready-to-deliver Model Y units […]
Nehal Malik
15 hours ago