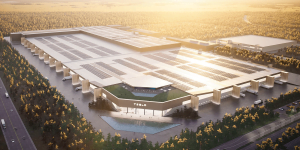 At the European Battery Conference earlier this week, Tesla shared an exciting few details about their plans for a future battery cell production facility at its Berlin Gigafactory, which could have major implications for the company’s ability to keep up with demand.

According to Tesla CEO Elon Musk, Tesla’s Berlin battery cell facility will be capable of producing up to 250 GWh worth of cells every year, as reported by Welt (via Teslarati). While it would start by producing 100 GWh, Musk shared with the keynote audience that it would be expanded to 200 or even 250 GWh per year, all astoundingly-higher than anything we’ve seen at Gigafactory Nevada.

Musk also shared information about upcoming car releases, as well as commenting on the environmental impact of the Brandenburg site, which faced local criticism for its resource-use earlier this fall.

“You can live right next to the battery factory and not have to worry about toxic substances,” Musk said.

The Tesla CEO went on to share that the pilot model of Tesla’s battery cell line is currently operating at the Fremont, California factory, where there are very strict environmental regulations. Musk also included that Tesla is developing new methods for battery cell production which would lead to environmentally-harmful steps being eliminated altogether.

Whatever the case may be, Tesla’s Gigafactory Berlin site is well underway, and it’s still set for completion summer of 2021. While cell production will likely take a lot longer, we can look forward to the decrease in emissions to come when it is completed.