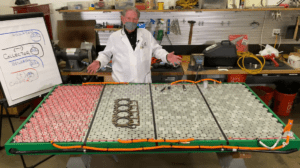 The mystery of Tesla’s new 4680 battery cell is not lost on the world – rather, most are aware that the new technology is a huge deal, even if they aren’t sure why it’s such a big deal.

In a new video uploaded by Sandy Munro’s YouTube channel, Munro Live, Munro goes through a Tesla 4680 battery mock-up and shows how the battery functionally works inside a Tesla. He also breaks down some of the differences between the new 4680 tabless cell battery and the old 2170 battery cell.

The new 4680 cell, which was announced earlier this fall at Tesla’s Battery Day event, is set to change the price of electricity altogether, though the company said it would take a few years of production to reach that level. CEO Elon Musk even hinted at a $25,000 (USD) Tesla, claimed to be hitting the public in just a few years.

In any case, it doesn’t take an expert to acknowledge the genius of Tesla’s battery packs. And with the new, tabless 4680 cell, the next few years will likely carry a number of exciting and related efficiency announcements–such as a Tesla Semi capable of up to 1,000 km or 621 miles.

Tesla to Build Electric Vehicle Chargers in China According to Filing