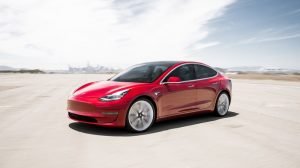 On Monday, it was reported that Tesla had stopped selling the $35,000 (USD) Model 3 for all new models, according to electrek. While the company can still sell the “off-menu” Model 3 from those in its inventory, the new Model 3 refreshed line will not offer a $35,000 (USD) option.

Shortly after the affordable Model 3’s launch in 2019, Tesla largely went silent on these standard range models, making it more difficult for customers to get their hands on them.

In a statement, Tesla said, “Given the popularity of the Standard Plus relative to the Standard, we have made the decision to simplify our production operations to better optimize cost, minimize complexity and streamline operations.” The company continued, “As a result, Model 3 Standard will now be a software-limited version of the Standard Plus, and we are taking it off the online ordering menu, which just means that to get it, customers will need to call us or visit any one of the several hundred Tesla stores.”

While the news is a bit of a loss for those looking to join the transition to sustainable transportation on a budget, Musk has alluded to a $25,000 (USD) car within the next three years – hopefully convincing a number of people that it’s time to make the switch to EVs.