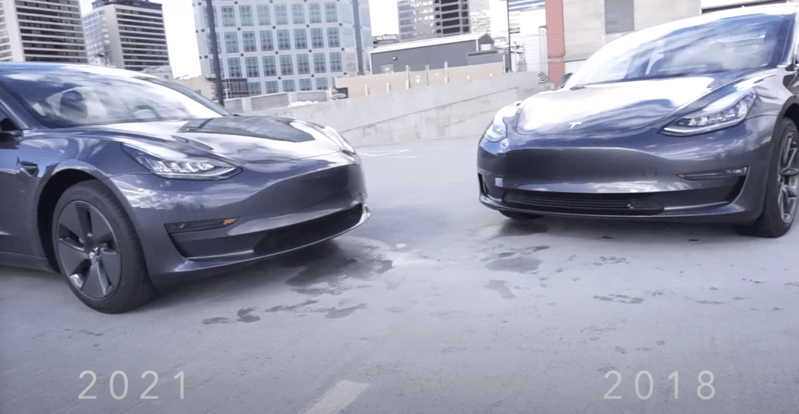 David Narayan has again shared another video of his 2021 Tesla Model 3, but this time compared to a 2018 Model 3, to show the major differences from the latest Model 3 refresh. A fellow Utah resident named Lucas showed up to meet with Narayan.

There’s a closer look at the revamped aero wheel covers, chrome delete, headlights, double-pane glass, steering wheel, USB-C ports, centre console, and more. You can jump to the different features compared in the timestamps below:

As for a sound difference with the new double-pane glass compared to the 2018 Model 3, a decibel meter of both cars driving resulted in the 2021 Model 3 only a decibel or two lower. Not a big difference when it comes to sound, says Narayan.

Overall, the new refresh for Tesla’s Model 3 comes with new features such as a heat pump like the Model Y, along with factory chrome delete, power trunk, new centre console and more. The new changes surely will help Tesla achieve its production goal of 500,000 vehicles in a single year for the first time.

Tesla will reportedly cut prices of its Model 3 and Model Y in China soon, if unnamed sources speaking with Huxiu are to be believed (via CnEVPost). The publication says a source indicated that Model Y may see a price cut by up to 40,000 yuan ($5,610 USD). Entry Model Y RWD prices may drop […]
Sarah Lee-Jones
18 hours ago

Tesla has started rolling out its Model 3 Track Package in Europe, expanding the feature outside the U.S and Canada for the first time. As spotted by @Tesla_Adri in Germany, the Model 3 Track Package is priced at €5,990 ($5,589 USD). The package costs $5,500 in the U.S. and $7,200 in Canada. “Optimize the performance on […]
Sarah Lee-Jones
1 day ago