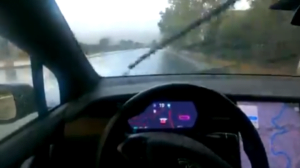 Tesla Owners Silicon Valley (@teslaownersssv on Twitter) posted two new videos Sunday, sharing a 14-minute, rainy drive with Tesla’s Full Self-Driving (FSD) beta feature on. Remarkably, there are no disengagements throughout the two videos, marking one of the longer engagements we’ve seen so far in the system’s early release in tricky situtations, and an impressive display given inclement weather patterns.

The videos feature a handful of complex intersections and other clever detections made by Tesla’s semi-autonomous FSD driving system.

#FSDBeta drive in the rain. No disengagement’s for a 14 minute drive. The future is here folks and brought to you by @elonmusk @tesla. Part 1 here. https://t.co/AhwNVtM7T7 pic.twitter.com/wdmGMNRsrE

The Twitter thread was also noticed by Tesla CEO Elon Musk, who weighed in on the post. In response to the videos, Musk wrote, “Thanks to a lot of great Autopilot/AI hardware & software engineers at Tesla!”

Thanks to a lot of great Autopilot/AI hardware & software engineers at Tesla!

As we see more and more of FSD’s capabilities unveiled, we can also expect to see its capabilities grow a lot too, according to prior statements by Musk. The AI systems used in the FSD’s algorithms record a number of data sets, and as more drivers use the system, more data will continue to enhance the feature itself.

As China celebrates its legal holiday of National Day this week, Tesla’s Gigafactory Shanghai will stay open with some added benefits for employees who work for the holiday. Tesla’s Giga Shanghai is remaining operational during China’s National Day holiday running from October 1 to 7, as reported by a source familiar with the matter reporting […]
Peter McGuthrie
20 hours ago

Tesla is looking to expand Gigafactory Nevada after years of announcing plans to do so, according to sources familiar with the matter reporting to electrek. Past statements by Tesla held that the Giga Nevada location would be able to produce around 105 GWh of battery cells per year and 150 GWh of battery packs per […]
Peter McGuthrie
21 hours ago