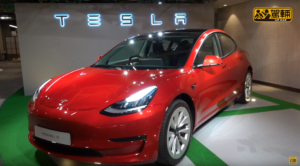 A new video released on YouTube and shared on Reddit breaks down the 2021 Model 3 refresh, including a number of exciting feature upgrades and changes.

The video, posted by YouTube channel 駕輛 UpCar and shared on the Tesla Motors subreddit by u/okaybutfirstcoffee, depicts the hosts in Hong Kong taking a look at the new Model 3, breaking down the list of its new features and elements.

The new Model 3 does include the newly-added foglights on which we reported recently, though it wasn’t totally clear which vehicle the car was. Now we see that it mimicked many of these new features, signifying that it was, in fact, Tesla’s new MIC Model 3.

Along with its updated headlights and new foglights, the refreshed Model 3 also includes:

Tesla’s newly-refreshed MIC Model 3 is certainly worth taking a look at – it’s slightly sleeker and better fine-tuned than previous models, and it’s set for delivery by the new year.

Tesla is gearing up for the grand opening of a new two-storey sales center at Ole Rømers Vej 11 in Ribe, Denmark on Saturday, November 26 (via @TSLA_Ownrs_DK).  Grand Opening of @Tesla’s new two-storey center in Ribe, Denmark on saturday, November 26 at 11 am at Ole Rømers Vej 11 🇩🇰⚡️ Come by and test […]
Nehal Malik
20 hours ago