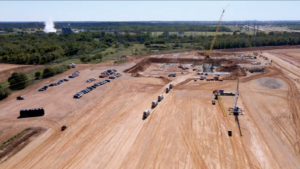 Tesla’s Terafactory Austin and Gigafactory Berlin are both well underway right now, and new progress updates come in on a pretty much week-to-week basis at this point.

In a new video released by Jeff Roberts on YouTube, Terafactory Texas is shown under progress as of Wednesday, depicting a number of exciting new additions to the construction site.

Among new things seen at the Austin, Texas site, a second casting machine is seen getting the first batch of cement by the original casting machine. In addition, we see a smaller version of the recent structure dubbed “Yellowzilla,” this one being colloquially referred to as “Son of Yellowzilla.” Alongside these, the Geopier and mobile batch plant departments are also making significant progress at the construction site.

With Tesla’s Austin factory, the company plans to release and produce its highly-anticipated Cybertruck, set for release and delivery in May 2021.

Along with plans to release the Cybertruck, Tesla will eventually use the Texas Terafactory to mine lithium and produce batteries by itself, bypassing, or at least adding to, the supply needs from companies like Panasonic and LG Chem Ltd, among others, which plan to supply batteries to Tesla for at least the next few years.

As Tesla’s Texas site continues to heat up, Gigafactory Berlin is also well underway, and is similarly expected to be delivering cars by summer 2021.