General Motors’ (GM) Super Cruise bested Tesla’s Autopilot in a series of assessments with vehicles containing driver-assistance systems on Wednesday. The assessment, conducted by Consumer Reports, found a Tesla Model Y equipped with Autopilot to be a “distant second” from a Cadillac CT6 with Super Cruise.

The latest test landed the Cadillac a 69 out of 100, while the Tesla Model Y could only muster a 57.

In the past, researchers dedicated to safety and insurance have cautioned companies from leaving customers with misconceptions about a given driver-assistance systems capabilities – it is said that with names like “Autopilot,” “ProPilot,” and “Co-Pilot,” drivers may have a hard time understanding that it’s not meant to be a fully or even partially autonomous system. Rather, the driver is expected to maintain focus on the road with the assistance system engaged, keeping at least one hand on the wheel at all times.

According to Consumer Reports, here’s why Super Cruise is better than Autopilot:

Monitoring whether the driver is paying attention is a big part of the reason that Super Cruise is still tops in our ranking. The system uses a small camera facing the driver’s eyes to assess whether they are watching the road ahead. If the system determines that a driver isn’t paying attention, it delivers multiple warnings—such as bright red lights on the upper rim of the steering wheel—to grab the driver’s attention. If the driver still does not react, the system will start to slow the car down on its own, eventually bringing it to a stop. It also will call for help.

Recently, it was discovered the in-car camera within the Tesla Model 3 and Model Y can detect driver facial movements and more. A future software update could definitely unlock a driver monitoring feature of some sort, and that’s when Super Cruise should fall to second place behind Tesla.

“When it comes to lane keeping assist, Tesla did the best in our tests. But systems from Audi, Cadillac, and Lincoln performed almost as well. A good system will assist the driver by maintaining placement in the center of the lane and keeping the vehicle well within the lane boundaries,” said Consumer Reports.

As you can see from the overall rating, Tesla ranks second with a score of 57, compared to 69 for Super Cruise. 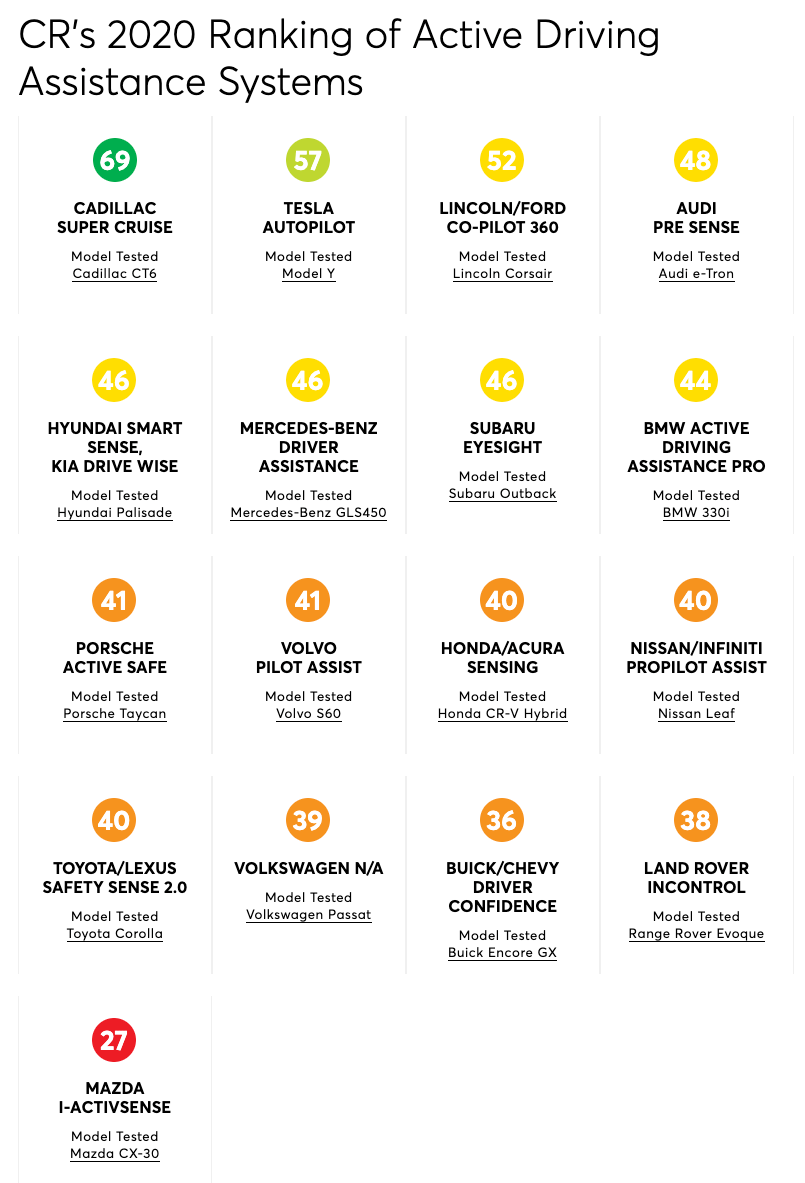 Tesla Autopilot did top the Ease of Use and Capabilities and Performance categories, scoring 7 and 9 out of 10, respectively.

The Cadillac CT6 has a history of outscoring Tesla models in driver-assistance assessments, including a 2018 report in which Super Cruise outperformed a Tesla Model 3’s Autopilot. GM plans to roll out its Super Cruise to the CT6 as well as over 20 vehicles, including the recently-announced Hummer EV which is set to release in 2022.

While a driver-facing infrared camera that watches the driver’s engagement may be the key difference between Super Cruise and Autopilot, both systems are still likely to continue improving over the next several years – and we can all look forward to that.

Now, if only Consumer Reports had its hands on Full Self-Driving beta…that would be interesting to see how results change.

Tesla Model Y buyers in Australia could bring the SUV’s price down by as much as $10,000, making it as affordable as the Mazda 3 with a new tax deal, according to The Driven. To achieve this level of savings, buyers must qualify for a combination of incentives including the country’s new fringe benefit tax […]
Peter McGuthrie
8 hours ago