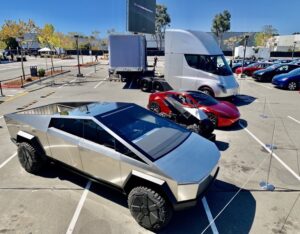 The city council of Pasadena, California, has approved plans for a Tesla Supercharger station in the city that will house six charging stalls designed exclusively for Tesla’s Cybertruck, reports Teslarati.

Tesla is quickly expanding its arsenal of Supercharger stations. Back in September, the EV giant announced it had submitted plans for a massive 47-stall Supercharger station at 85 E. State Street, Pasadena, CA, containing some stalls that would cater exclusively to the automaker’s upcoming Cybertruck.

Tesla’s Cybertruck, a fully electric pickup truck set to come off the production line sometime in 2021, easily dwarfs most cars on the market today. That being the case, the Cybertruck is going to needs its own dedicated Supercharger spaces.

Earlier this week, the Pasadena City Council met to discuss a number of different issues, which, according to their publicly available agenda, included the plans for this specific Supercharger station. The proposal was voted on and approved during this meeting.

Of the 47 charging stalls outlined in the plans submitted for the station, 20 belong to Pasadena Water and Power (PWP), which is partially financing the project, with the rest being Tesla V3 Superchargers.

The approval of the Supercharger station at 85 E. State Street furthers Tesla’s goal of bringing 200+ new V3 Superchargers to the LA Metro area in 2021.