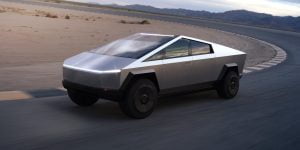 The Tesla Cybertruck was announced last year and dominated headlines with its unique design, unlike conventional trucks.

According to Tesla, the Cybertruck has “a nearly impenetrable exoskeleton” that is extremely durable. With a fully electric design, this vehicle will be “bad ass” according to CEO Elon Musk speaking on the recent Automotive News podcast. The vehicle is targeting the segment of buyers that would normally purchase a Ford F-150.

It’s understandable that the size of a Cybertruck is quite large, and might not be the handiest vehicle out there. When asked whether or not Tesla would create a smaller version of the Cybertruck, Musk said that it was “highly likely”:

Highly likely down the road

The Cybertruck could be adapted into a pickup truck if needed. In an interview with Automotives News, Musk stated that if no one was interested in the “weird-looking” Cybertruck, then they could simply build a new model completely:

“Wasn’t super worried about that because if it turns out nobody wants to buy a weird-looking truck, we’ll build a normal truck, no problem. There’s lots of normal trucks out there that look pretty much the same; you can hardly tell the difference. And sure, we could just do some copycat truck; that’s easy. So that’s our fallback strategy.”

The current Tesla Gigafactory being built in Austin, Texas, will produce the company’s upcoming Cybertruck.

Having a smaller model of the Cybertruck with a more ‘aesthetic’ appearance could allow for more versatility. Not many other details for the Cybertruck have been revealed just yet. You can check out the Cybertruck in this recent video where Jay Leno took the vehicle for a spin with Elon Musk.