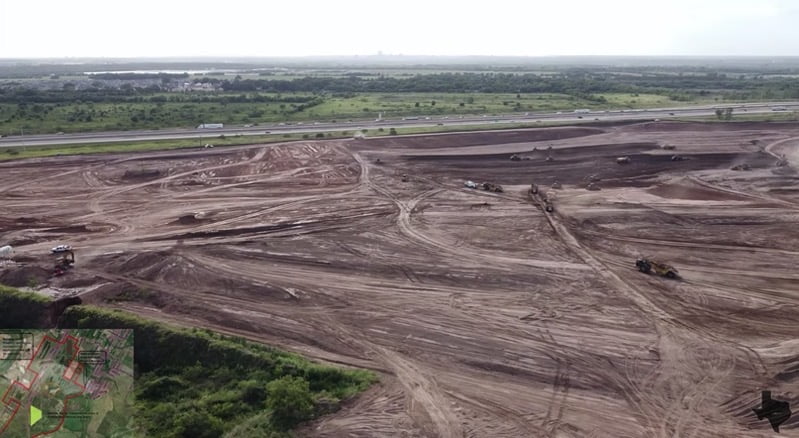 After announcing during its second quarter earnings call it had decided on Texas as the next location for its ‘terafactory’, Tesla’s future site of Cybertruck production continues to progress at a solid pace.

A new video filmed by drone over the Austin, Texas, site by the Terafactory Texas YouTube channel reveals massive cleaning of the area continues.

“In the shots looking out into the distance, I’m trying to let you all see an overview of additional parts of the property that are huge. So whenever you can see a lot of greenery directly across the highway, to the east and southeast up to the river, and even way north of the current construction, this is all parts of Tesla’s property at the site!”, explains the channel.

The future home of a Tesla terafactory appears to have most of the land levelled, one one section of the site looks to have some sort of fabric laid down, which some believe is geotextile fabric, which allows water to pass through but stops movement of silt and sand, allowing for further stability of the soil.

Tesla will produce Model 3, Model Y and Cybertruck at its upcoming terafactory. The company continues to churn out huge buildings across the globe, as alongside Texas, new gigafactories are underway in China and Germany.

Tesla’s Gigafactory Texas is reportedly aiming for 75,000 units of the Model Y in the first quarter of 2023, according to an unnamed source who shared the information with electrek. The figure equates to more than 5,000 units per week at the site for the entire quarter, marking a significant production increase from the 1,000 […]
Peter McGuthrie
19 hours ago

As Tesla heads into the final month of the year, the automaker is looking to boost customer orders with a new discount option for its flagship sedan and SUV models. Tesla is offering a $3,750 discount on Model 3 and Model Y orders in North America, as seen in a text message sent from the […]
Peter McGuthrie
21 hours ago