In a tweet published on Saturday, @saskevca reveals that Tesla is looking for sales advisors in Saskatoon and Winnipeg in Canada.

The information comes directly from the official Tesla website, where two new job listings for a Tesla Advisor (Sales) can be found — one in Saskatoon, Saskatchewan, and the other in Winnipeg, Manitoba.

.@Tesla is looking for sales advisors in Saskatoon and Winnipeg! #yxe ⚡️https://t.co/n47SktkJK2

Since sales advisors assist potential customers at retail locations, it can be said with some confidence that Tesla intends to launch sales and delivery centres in both cities.

Adding to its arsenal of sales and delivery centres, Tesla could quite possibly be gearing up for even more deliveries in Q4 2020 than it managed to rack up in Q3.

With Tesla altering its “Carrier Direct” policy to make it so it no longer delivers cars to your home if you live too far away from a Tesla showroom, this is good news — not only for residents of Saskatoon and Winnipeg but for Tesla owners and enthusiasts all over the provinces of Saskatchewan and Manitoba.

According to the job listing, Tesla is looking for an “energetic, highly organized, and hard working” sales advisor to “support customers from the moment they walk into our showrooms to learn about Tesla through to their delivery day experience.” 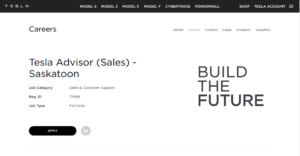 Neither posting reveals exactly where either location will be, but the Tesla’s offerings should be available in both Saskatoon and Winnipeg soon, judging by the fact that they’re already hiring for both locations.

Tesla has changed its estimated delivery times on all models in China, with the order configurator page now saying all Model 3 and Y trims will be delivered in “December 2022” (via @Tslachan). Previously, each trim and model displayed one to five weeks for estimated delivery. The change comes as Tesla seemingly pivots to focus […]
Peter McGuthrie
2 hours ago

Long-term vehicle subscription service Autonomy has launched an end-of-year sale that lets users subscribe to a Tesla Model 3 for what it is calling the “lowest price anywhere” for the electric sedan. Customers need to put down a $3,000 deposit and then pay $450 per month for the first 12 months, said Autonomy earlier this […]
Peter McGuthrie
3 hours ago