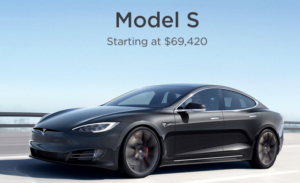 In an exciting and welcome change, Tesla has increased the range on its Model S Performance standard range from 348 to 387 miles. The Long Range version of the vehicle did not increase its range, and is instead still sitting at 402 miles.

The gauntlet has been thrown down!

The prophecy will be fulfilled.

In addition to the changes made to the Model S, the Models 3 and Y both also received a few upgrades: the Model 3 Standard Range, Long Range, and Performance models received range improvements of 13, 31, and 16 miles, respectively. Speculation is the Model 3 now has a heat pump to add for extra efficiency and range.

While the range and price changes bode well for anyone looking to buy into sustainable transportation right now, they arrive on the cusp of a lot of exciting developments for Tesla. The company is currently building new locations in the US and Germany, planning a move into India, working on a lithium plant in the US, and preparing for its US launch of the Cybertruck in 2021 – and its momentum is far from slowing down.

Recent weeks have brought on conversations about Tesla’s price cuts in markets around the world, and now the automaker is pushing a new message on its website for Model 3 leasing. Tesla’s Model 3 is now leasing at prices as low as $399 per month, according to a change on the automaker’s website yesterday, notes […]
Peter McGuthrie
26 mins ago