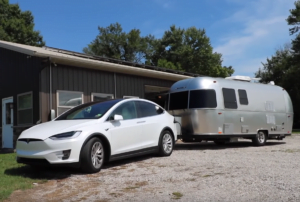 Electric vehicles (EVs) are on the rise, but will there soon be a time when Tesla and other EVs can tow trailers?

The answer is yes – that time has come sooner than you’d ever expect.

YouTube channel All Electric Family released a new video, in which the family of four tows an Airstream in a Model X alongside the family’s normal trailer, in order to find out which was more efficient.

In the video, the family found that towing the Airstream was 27% more efficient than the trailer they own, compared to Airstream’s estimation that it would be 20% more efficient. The family also commented that the Airstream felt very easy and comfortable to tow, saying that they would often forget it was behind them.

The Tesla Model X averaged 800 Wh/mi on the trip, which was split into three legs ranging from 33.5 miles on the low end to 87.6 miles on the high end.

The Model X also includes cheetah mode, which allows Teslas to go faster by lowering the front wheels a small amount. While towing obviously isn’t about speed, the feature is a helpful one and reminds the user of the features offered by this EV.

The Tesla Model X can, in fact, tow an Airstream, and thus is perfect for family camping trips and other, long-term towing needs.