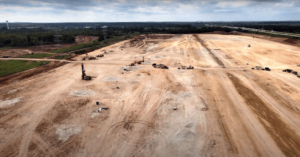 In his recently published YouTube video, Jeff Roberts documents the developments made on the construction site for Tesla’s Austin Terafactory located in southeastern Travis County.

Anyone with a keen eye will be able to make out how far along construction on the facility is, with there even being noticeable changes from as recently as earlier this week. Soil work and wet-land drainage seem to be almost completed, so we should soon be moving into the cement-pouring and foundation-laying phases.

In addition, spy the newly acquired 381 acres of land adjacent to the original 2,100 acre site in the second half of the video. Naturally, construction on this parcel of land is a bit behind the rest of the project.

Tesla was granted tax breaks amounting to $60 million by Travis County and the Del Valle school district to help facilitate and expedite the development of this project, which will create over 5,000 jobs and include amenities such as a bike-and-hike trail and a boardwalk for the public.

Tesla hopes to have the facility piping out Cybertruck pickups and other EVs from its catalogue as early as May 2021, so construction is naturally moving at an alarmingly fast pace.

Tesla CEO Elon Musk recently met with French President Emmanuel Macron to discuss the “manufacturing of electric vehicles and batteries,” among other things. “In line with our ambition for decarbonizing and reindustrializing France and Europe, with @elonmusk we exchanged on future green industrial projects, such as manufacturing of electric vehicles and batteries,” President Macron said […]
Nehal Malik
4 hours ago