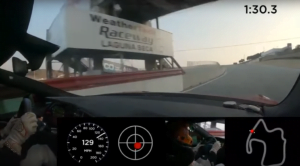 After Tesla’s Battery Day announcement that its Model S Plaid set a record time of 1:30.3 at the Laguna Seca track, many fans were left wondering who the record-setting driver was.

In a new video shared on the r/TeslaMotors subreddit, it was revealed that the Tesla Model S Plaid record-setter was driver Johannes Van Overbeek. The video was shared by Sebastian Vittel. You can recognize Overbeek’s helmet in the video below:

The video description says, “Here it is the record lap on Laguna Seca for the Tesla Model S Plaid of 1100HP…only 2 seconds slower than a [Porsche] 991 GT2 RS…Next stop at the Nurburgring, I can’t wait [to] stay in touch :-)”, said Vittel.

Also clarified is there is a stock Tesla Model S seat, rather a “bucket seat for my own security only.”

The record-breaking time comes just a few weeks after the Lucid Air was released to the public, and subsequently beat the prior record time at Laguna Seca, running a 1:33 lap at the track.

One user on Reddit commented on the video’s thread, saying, “Think about what a 100k mile 2021 Plaid Model S will sell for in 2029. Really… think about it. Think how fast it’ll still be. It’s not like all other cars will be that fast by then. It’ll still have a LOT of range. Its maintenance will not be crazy.” They continued, “But really… it’s not like its going to have Porsche or Ferrari or Lambo prices. Those things are just insane money pits as soon as you drive it off the lot.”

Vittel has previously raced a Tesla Model 3 at Nurburgring and it appears his skills have caught the attention of Tesla.

Not only did Tesla share its record-time with the Model S Plaid at Battery Day, but they also released the car to the consumer market on its website, starting at $140,000 USD.

Tesla fans already pushing for the Model S Plaid to race Nurburgring, set to be a first in many respects.

Update: The driver of the Tesla Model S is Johannes Van Overbeek, not Sebastian Vittel, according to electrek.