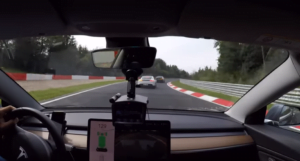 Electric vehicle (EV) racing is the future, for now. Soon, it’ll become the standard for present days, especially with how well some EVs are already performing on tracks around the world.

In a video released Monday, automotive YouTube host Sebastian Vittel took the Tesla Model 3 out for a spin alongside the Porsche Taycan to see what both EVs can do. The video, which takes place at Germany’s Nürburgring track, shows the two vehicles facing off on a private track day, and breaks down a few of the benefits of each.

After the second lap, the Tesla Model 3 Performance was down to 53% battery from 95% battery, where it had started. Even with the stock specs on each car, both were considered by the host to be fairly fast and even, though the Tesla excelled at a sprint more so than the Taycan, and the opposite could be said of the cars’ endurance levels.

According to the video’s description, the hosts took both vehicles for another round after the first race, in which the Tesla displayed a weaker performance while the Taycan’s performance stayed roughly the same.

No matter what the future holds for the racing world, it’s safe to say that EVs are going to be a part of it, and at increasing levels over the next several years.