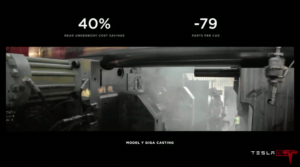 Tesla has recently been trying to reduce the sheer amount of parts used in most of its vehicles’ castings, and the recent update is an exciting one to the compact SUV Model Y.

On Tuesday, at the Tesla Battery day event, CEO Elon Musk announced to shareholders and virtual viewers that Tesla is building a single-piece rear casting for the Model Y. With so many recent developments to the company’s casting machines around the world, the piece has been rumored here and there for a little while now. Tesla also shared that it had to design its own alloy to even be able to cast the single piece correctly.

You realise they're making the whole rear of the Model Y out of a single casting right? Who else is mass producing a car like that?
Others need to be watching Tesla, not vice versa. Others are just following convention, hence it's easier to get running. 🙂

The Model Y announcements are considered by many to be a breakthrough in EV manufacturing, given that the reduction from 70 parts to one-single rear piece will increase efficiency significantly. Additionally, updated wiring, suspension springs, and brake lines are included in the single cast, offering a major upgrade to production from the factory’s end.

Whatever Tesla decides for the future of its Model Y, the updated rear casting will make a major difference to production efficiency, and should help the company in its goal to make the car more widely available.