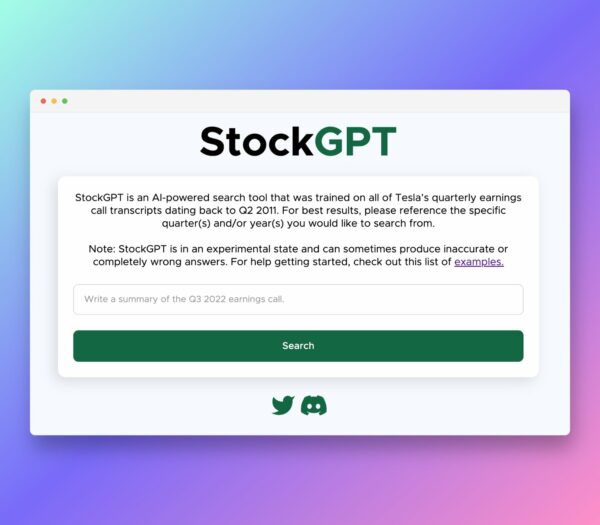 @Alec Corum launched StockGPT on Sunday, which he describes as an AI financial search tool. This particular tool was trained on Tesla’s quarterly earnings call transcripts dating as far back as the second quarter of 2011.

Corum says the tool is great for finding specific commentary on topics during a certain quarter or evaluating performance in a pre-defined time period. Additionally, it can be useful for finding information on specific company struggles, simply by asking it directly.

The platform also notes that the tool is still in an “experimental state,” adding that its answers can, at times, be inaccurate or completely wrong. The site also provides a list of examples of past mistakes the AI tool has spit out.

One user asked Corum how much it would cost to get transcripts and train the model on all 500 S&P Index companies, to which Corum said he estimates between $700 and $1,000.

The news comes after the public has recently gone nuts over ChatGPT, a chatbot which can be used similarly as a search function with simple questions, requests and information often yielding intuitive results. Today, Microsoft announced a a multi-billion partnership with OpenAI, the makers of ChatGPT.

Tesla’s next earnings call is scheduled for January 25, focusing on the automaker’s fourth quarter of 2022. The company is already accepting questions from shareholders via this Say Technologies q&a forum.