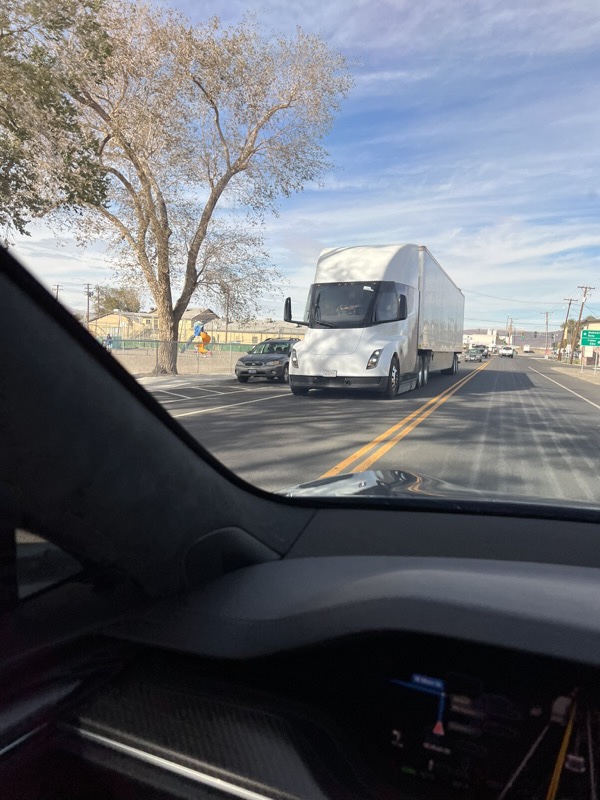 Tesla continues to test its Semi truck ahead of its first deliveries slated for December 1, 2022, to PepsiCo.

According to a new video and picture shared by Semi-stalker @HinrichsZane, we see the Semi drive through a roundabout in Silver Springs, located about 40 miles east of Reno, Nevada.

The Semi stops ahead of the roundabout and is seen driving away, honking to the camera. We can hear the Semi’s electric motors whirl as the truck impressively accelerates away with a trailer attached. Tesla says the Semi fully loaded with 82,000 pounds of gross combined weight can go from 0-60mph in 20 seconds, to go with 500 miles of estimated range, powered by three independent motors.

It’s unclear if the Semi was carrying a full load or not. We may soon hear a Semi ‘fart’ in the future, possibly.

Earlier this week, it was reported the Semi received EPA certification ahead of its first deliveries.

Tesla said during its Q3 earnings call it plans to make 50,000 Semi trucks in 2024 for North America, while the truck’s status is now “in early production.”

Tesla on Thursday evening held its Semi delivery event, where it delivered its first production electric truck to customer, PepsiCo. Company CEO Elon Musk was on hand for a presentation alongside Dan Priestley, Senior Manager, Semi Truck Engineering the company (who did an incredible job beside Musk). Both Musk and Priestley highlighted the major features of […]
Sarah Lee-Jones
18 hours ago